TQ 11 Nevermore Behind The Quotes

This episode of The Quotables podcast covers some famous quotes by a couple of my favorite poets. Being a poet myself, I appreciate the written word and understand how a simple phrase can change the way you perceive life and everything therein. Depending on the right word, the right position of words, or the exemption of a word, can change how you experience the thoughts and feelings conveyed. 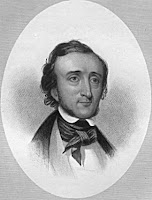 Edgar Allen Poe was such a wordsmith. His use of words and how he phrased them created an atmosphere of  mostly dark images that transported the reader into his fantastical, yet somewhat psychotic world that he so eloquently fashioned into being. I found a fondness, early on, for Poe's unique perspective on life. The sadness, despair, the longing he represented in his vast writings, from poems, to stories of characters that were tormented by loss, or simply just driven to madness.  Poe demonstrated throughout his many masterpieces an examination, such as the likes of a physician, in his meticulous constructions of words. Dark and brooding, dank with downtrodden displays of desperation, devilishly and delectably he delved into the distraught dwellings of the minds of his most disillusioned doppelgangers.
From "The Tell Tale Heart" to "The Raven" to my favorite poem of all time, "Annabel Lee", darkness was always something that plagued Edgar his whole life. He knew loss, he felt the pains of not being appreciated for his talent, and he lived his life clouded by the demons of doubt and determination to escape his dungeon of despair.  Edgar Allen Poe would only know true peace after his death, I would assume, for he seldom enjoyed that one peace he searched for, never quite achieving in his written words. His studies on the darker side of the human condition where the heart and mind are caught in a dance between wants and needs, with his sanity dangling so delicately in the balance, proved to be very insightful and cathartic for those who might find themselves on the fringe of happiness.  Poe's best work, I think, still stands the test of time and teaches us to delve a little deeper than just the status quo of our sometimes average lives, and invites us to journey into madness, if ever so briefly, to come back to the "sane" world reinvigorated to better oneself. A world where, maybe if through the journey alone, sadness and despair will find you, "Nevermore"! 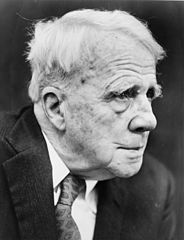 Another poet's words we discuss on this episode are from Robert Frost. A great man who, compared to Edgar Allen Poe, was much brighter through his use of the written word. "The Road Less Traveled" is another favorite poem of mine. I can easily recall learning and reciting it line for line admiring the beautiful images it portrayed. The poem was not just a visual experience, but it was more a tale of taking a chance in life by a less traveled path to your destination. Reaching out a little beyond your own self imposed or even societal boundaries.
Frost was a "city boy", but often wrote of country living. focusing on the simpler things life had to offer. Like the leaves, the trees, nature, you could see the picture he so eloquently painted, and they were places you would want to take a stroll in. Even in "Stopping By The Wood On A Snowy Evening" you wanted to be there. I would say Frost made you an environmentalist, even if you had never considered that to be something you were. Hope and responsibility to do the right things in life, to make the right decisions, and to stand firm in those decisions.
I hope you enjoy listening to TQ 11 Nevermore as much and Cheryl and I enjoyed bringing the episode to fruition, and we thank you for listening!